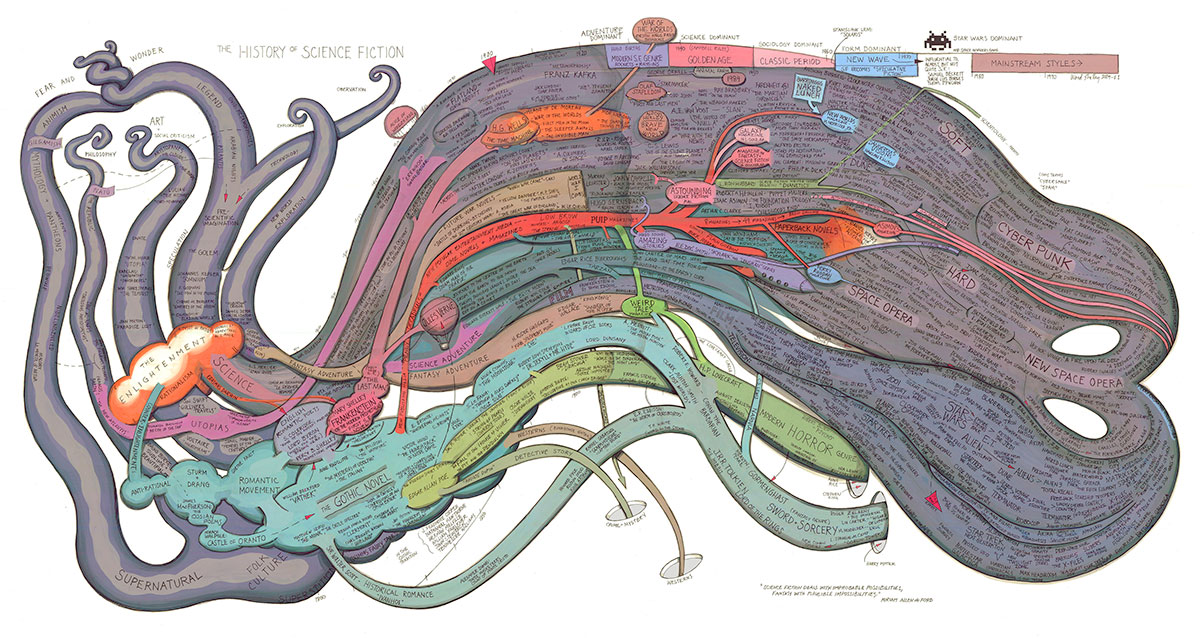 Hyperstition is a neologism that combines the words ‘hyper’ and ‘superstition’ to describe the action of successful ideas in the arena of culture. Akin to neo-Darwinist Richard Dawkins’ concept of memes, hyperstitions work at the deeper evolutionary level of social organisation in that they influence the course taken by cultural evolution. Unlike memes, however, hyperstitions describe a specific category of ideas. Coined by renegade academics, the Cybernetic Culture Research Unit (CCRU), hyperstition describes both the effects and the mechanisms of apocalyptic postmodern ‘phase out’ or ‘meltdown’ culture.

Functioning as magical sigils or engineering diagrams hyperstitions are ideas that, once ‘downloaded’ into the cultural mainframe, engender apocalyptic positive feedback cycles. Whether couched as religious mystery teaching, or as secular credo, hyperstitions act as catalysts, engendering further (and faster) change and subversion. Describing the effect of very real cultural anxieties about the future, hyperstitions refer to exponentially accelerating social transformations. The very real socio-economic makeover of western (and increasingly global) society by the hyperstitions of Judeo-Christianity and free-market capitalism are good examples of hyperstitional feedback cycles. As Nick Land explains: “capitalism incarnates hyperstitional dynamics at an unprecedented and unsurpassable level of intensity, turning mundane economic ‘speculation’ into an effective world-historical force”(email interview).

Not only do the ideas themselves function as hyperstitions, but the trauma and fear engendered by their cultural ‘makeovers’ (whether in the form of crusade, jihad, secular war, industrial revolution or economic reform) merely serve to further empower the basic premise and fan the flames.

“Popular anxieties about the uncertainties of the future procured by rapid change are not merely the issue of ignorance,” explains historian Felipe Fernández-Armesto. “Rather they are symptoms of a world in the grip of ‘future shock'” (2001:556). Those who find change unbearable not only expect it to become uncontainable but work to make it so by fanning the flames of paranoia. ‘Future shock’ is one mechanism whereby hyperstition works to bring about the causal conditions for apocalypse. Once started, a hyperstition spreads like a virus and with unpredicatable effects. They are “chinese puzzle boxes, opening to unfold to reveal numerous ‘sorcerous’ interventions in the world of history,” explains Land (CCRU.net).

It’s not a simple question of true or false with hyperstitions, explains Land. Rather, its a question of “transmuting fictions into truths”. Belief in this context isn’t passive. As the CCRU website explains, the situation is closer to the modern phenomenon of hype than religious or rational ‘belief’ as we’d ordinarily think about them. “Hype actually makes things happen and uses belief as a positive power. Just because it’s not ‘real’ now, doesn’t mean it won’t be real at some point in the future. And once it’s real, in a sense, it’s always been” (CCRU.net).

“Hyperstitions by their very existence as ideas function causally to bring about their own reality,” explains the CCRUs Nick Land. “The hyperstitional object is no mere figment or ‘social construction’ but it is in a very real way ‘conjured’ into being by the approach taken to it” (ibid). Even conventional historians allude to this process. As Fernández-Armesto cautions in Civilizations (2001: 544), “illusions – if people believe in them -change the course of history.”

Falling outside the parameters of conventional philosophy, the concept of hyperstition subscribes to what French post-structuralists Deleuze and Guattari have broadly termed schizoanalysis. Unlike conventional philosophy, with “its predeliction for Platonic-fascist top-down solutions,” explains Nick Land in Meltdown, schizoanalysis avoids seeing ideas as static (1995:2). Rather, it favours an approach that sees ideas as diagrams that are “additive rather than substitutive, and immanent rather than transcendent: executed by functional complexes of currents, switches and loops, caught in scaling reverberations” (1995:2). Primed to create what Deleuze and Guattari have termed Bodies without Organs (BWOs) – namely metaphorical exploration devices of the kind crafted by engineers, artists and even junkies to ‘map’ new cognitive territories – schizoanalysis denotes a technique that can be utilised for analysing hyperstitions. The BWO, like a hyperstition, indicates an inchoate flux of deterritorialised energy; a speeding up. After all, the investigation and crafting of novel directions for culture, implied by BWOs and other types of schizoanalysis, necessitates an investigation of the very mechanisms of cultural overdrive or meltdown. Fictions that explore these areas are in themselves hyperstitional, functioning to speed things up and bring about the very condition of apocalypse.

The CCRU has coined the term ‘K- tactics’ to describe the action of hyperstition, using the mode of schizoanalysis, in contemporary information culture. “K-tactics,” explains Land, “is not a matter of building the future, but dismanteling the past … and escaping the technical neurochemical deficiency conditions for linear-progressive [narratives]” (1995:13). Symptomatic of a type of cultural illness induced by future shock, the hyperstitional ‘infection’ brings about that which is most feared; a world spiraling out of control. This, manifestly, is the task of the’hyperstional cyberneticist,’ according to Land – namely, to “close the circuit” of history by detecting the “convergent waves [that] register the influence of the future on its past”.

As Nick Land explains in the Catacomic (1995:1), a hyperstition has four characteristics: They function as (1) an “element of effective culture that makes itself real,” (2) as a “fictional quality functional as a time-travelling device,” (3) as “coincidence intensifiers,” and (4) as a “call to the Old Ones”. The first three characteristics describe how hyperstions like the ‘ideology of progress’ or the religious conception of apocalypse enact their subversive influences in the cultural arena, becoming transmuted into perceived ‘truths,’ that influence the outcome of history. Finally, as Land indicates, a hyperstition signals the return of the irrational or the monstrous ‘other’ into the cultural arena. From the perspective of hyperstition, history is presided over by Cthonic ‘polytendriled abominations’ – the “Unuttera” that await us at history’s closure (in Reynolds 2000:1). The tendrils of these hyperstitional abominations reach back through time into the present, manifesting as the ‘dark will’ of progress that rips up political cultures, deletes traditions, dissolves subjectivities. “The [hu]man,” from the perspective of the Unuttera “is something for it to overcome: a problem, drag,” writes Land in Meltdown (1995:14).

Exulting in capitalism’s permanent ‘crisis mode,’ hyperstition accelerates the tendencies towards chaos and dissolution by invoking irrational and monstrous forces – the Cthonic Old Ones. As Land explains, these forces move through history, planting the seeds of hyperstition:

John Carpenter’s In the Mouth of Madness includes the (approximate) line: “I thought I was making it up, but all the time they were telling me what to write.” ‘They’ are the Old Ones (explicitly), and this line operates at an extraordinary pitch of hyperstitional intensity. From the side of the human subject, ‘beliefs’ hyperstitionally condense into realities, but from the side of the hyperstitional object (the Old Ones), human intelligences are mere incubators through which intrusions are directed against the order of historical time. The archaic hint or suggestion is a germ or catalyst, retro-deposited out of the future along a path that historical consciousness perceives as technological progress.

The ‘Old Ones’ can either be read as (hyper)real Lovecraftian entities – as myth made flesh – or as monstrous avatars representing that which is most uncontainable and unfathomable; the inevitable annihilation that awaits all things when (their) historical time runs out. “Just as particular species or ecosystems flourish and die, so do human cultures,” explains Simon Reynolds (2000:1). “What feels from any everyday human perspective like catastrophic change is really anastrophe: not the past coming apart, but the future coming together” (ibid).